EDOGA-SULLIVAN (Japanese: エドガー・サリヴァン) is a Japanese band formed in 2015. Much of their fans are from Japan and Taiwan, though their song 'WONDERFUL WONDER' gained international traction as it was used for the opening of the anime Ao-chan Can't Study!.

The band currently consists of Sasaki Moe (vocals) and Sakamoto Haruka (guitar). They had 3 former members who had instrumental roles.

The band's name was based on their origin ward, Edogawa, in Tokyo.

In June 2018 and December 2019, they performed live at Amuse Fes MAKUHARI.

In February 2019, they had their new major label established named 'O⚡︎EDO LABEL'. 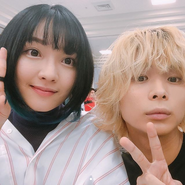 They look cute together 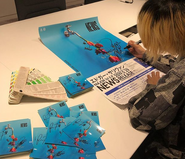 Signing their NEWS EP
Add a photo to this gallery
Retrieved from "https://music.fandom.com/wiki/EDOGA-SULLIVAN?oldid=193953"
Community content is available under CC-BY-SA unless otherwise noted.