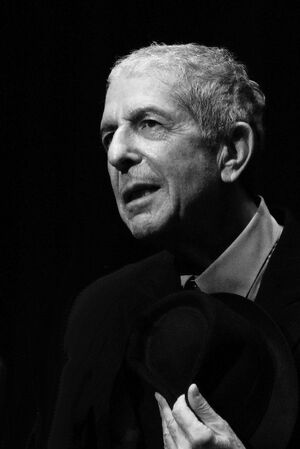 Leonard Norman Cohen, CC GOQ (born 21 September 1934) is a Canadian Juno Award-winning singer-songwriter, musician, poet, and novelist. His work often explores religion, isolation, sexuality, and interpersonal relationships. Cohen has been inducted into the American Rock and Roll Hall of Fame and both the Canadian Music Hall of Fame and the Canadian Songwriters Hall of Fame. He is also a Companion of the Order of Canada, the nation's highest civilian honour. In 2011 Cohen received a Prince of Asturias Award for literature.

In a speech at Cohen's induction into the Rock and Roll Hall of Fame on 10 March 2008, Lou Reed described Cohen as belonging to the "highest and most influential echelon of songwriters."

The critic Bruce Eder wrote an assessment of Cohen's overall career in popular music, writing, "[Cohen is] one of the most fascinating and enigmatic … singer/songwriters of the late '60s … [and] has retained an audience across four decades of music-making … Second only to Bob Dylan (and perhaps Paul Simon) [in terms of influence], he commands the attention of critics and younger musicians more firmly than any other musical figure from the 1960s who is still working at the outset of the 21st century."

The Academy of American Poets has commented more broadly on Cohen's overall career in the arts, including his work as a poet, novelist, and songwriter, stating that "[Cohen's] successful blending of poetry, fiction, and music is made most clear in Stranger Music: Selected Poems and Songs, published in 1993, which gathered more than two hundred of Cohen's poems … several novel excerpts, and almost sixty song lyrics … While it may seem to some that Leonard Cohen departed from the literary in pursuit of the musical, his fans continue to embrace him as a Renaissance man who straddles the elusive artistic borderlines."

Cohen was born on 21 September 1934 in Westmount, an English-speaking area of Montreal, Quebec, into a middle-class Jewish family. His mother, Marsha (Masha) Klonitsky, was the daughter of a Talmudic writer, Rabbi Solomon Klonitsky-Kline of Lithuanian Jewish ancestry. His paternal grandfather, whose family had emigrated from Poland, was Lyon Cohen, founding president of the Canadian Jewish Congress. His father, Nathan Cohen, who owned a substantial clothing store, died when Cohen was nine years old. On the topic of being a Kohen, Cohen has said that, "I had a very Messianic childhood." He told Richard Goldstein in 1967, "I was told I was a descendant of Aaron, the high priest."

Cohen attended Roslyn Elementary School and, from 1948, Westmount High School, where he was involved with the student council and studied music and poetry. He became especially interested in the poetry of Federico Garcia Lorca. As a teenager, he learned to play the guitar, and formed a country-folk group called the Buckskin Boys. Although he initially played a regular acoustic guitar, he soon switched to playing a classical guitar after meeting a young Spanish flamenco guitar player who taught him "a few chords and some flamenco."

Cohen frequented Saint-Laurent Boulevard where he went for fun and ate at places such as the Main Deli Steak House. According to journalist David Sax, the Main deli was where Cohen and one of his cousins would go to "...watch the gangsters, pimps, and wrestlers dance around the night." Cohen also enjoyed visiting the previously raucous bars of Old Montreal as well as Saint Joseph's Oratory, which had the closest restaurant near Westmont where he and his friend Mort Rosengarten could go for coffee and a smoke. After moving out of Westmount, Cohen purchased a place in the previous working-class neighborhood of Montreal's Little Portugal on Saint-Laurent Boulevard where he read his poetry at various surrounding clubs. It is also during his time there in the small neighborhood that he wrote the lyrics to what would become some of his most famous songs.

In 1951, Cohen enrolled at McGill University, where he became president of the McGill Debating Union and won the Chester MacNaghten Literary Competition for the poems "Sparrows" and "Thoughts of a Landsman." Cohen published his first poems in March 1954 in the magazine CIV/n. The issue also included poems by Cohen's poet-professors (who were also on the editorial board), Irving Layton and Louis Dudek. Cohen graduated from McGill the following year with a B.A. degree. His literary influences during this time included William Butler Yeats, Irving Layton (who taught political science at McGill and became both Cohen's mentor and friend), Walt Whitman, Federico Garcia Lorca and Henry Miller. His first published book of poetry, Let Us Compare Mythologies (1956), was published by Louis Dudek (who taught poetry at McGill and was also a mentor to Cohen) as the first book in the McGill Poetry Series the year after Cohen's graduation. The book contained "poems written largely when Cohen was between the ages of fifteen and twenty," and Cohen dedicated the book to his late father. The famous and influential Canadian literary critic Northrop Frye wrote a review of the book in which he gave Cohen "restrained praise."

After completing his undergraduate degree, Cohen spent a term in McGill's law school and then a year (1956–7) at the School of General Studies at Columbia University. Cohen described his graduate school experience as "passion without flesh, love without climax." Consequently, Cohen left New York and returned to Montreal in 1957, working various odd jobs and focusing on the writing of fiction and poetry, including the poems for his next book, The Spice-Box of Earth (1961), which was the first book that Cohen published through the Canadian publishing company McClelland & Stewart. Fortunately for Cohen, his father's will provided him with a modest trust income, sufficient to allow him to pursue his literary ambitions for the time, and The Spice-Box of Earth was successful in helping to expand the audience for Cohen's poetry, helping him reach out to the poetry scene in Canada, outside the confines of McGill University. The book also helped Cohen gain critical recognition as an important new voice in Canadian poetry. One of Cohen's biographers, Ira Nadel, stated that "reaction to the finished book was enthusiastic and admiring...the critic Robert Weaver found it powerful and declared that Cohen was 'probably the best young poet in English Canada right now.'"

Cohen continued to write poetry and fiction throughout much of the 1960s and preferred to live in quasi-reclusive circumstances after he bought a house on Hydra, a Greek island in the Saronic Gulf. While living and writing on Hydra, Cohen published the poetry collection Flowers for Hitler (1964), and the novels The Favourite Game (1963) and Beautiful Losers (1966). His novel The Favourite Game was an autobiographical bildungsroman about a young man who discovers his identity through writing. Beautiful Losers received a good deal of attention from the Canadian press and stirred up controversy because of a number of sexually graphic passages. In 1966 Cohen also published Parasites of Heaven, a book of poems. Both Beautiful Losers and Parasites of Heaven received mixed reviews and sold few copies.

Subsequently, Cohen published less, with major gaps, concentrating more on recording songs. In 1978, he published his first book of poetry in many years, Death of a Lady's Man (not to be confused with the album he released the previous year with the similar title, Death of a Ladies' Man). It wasn't until 1984 that Cohen published his next book of poems, Book of Mercy, which won him the Canadian Authors Association Literary Award for Poetry. The book contains 50 prose-poems, influenced by the Hebrew Bible and Zen writings. Cohen himself referred to the pieces as "prayers". In 1993, Cohen published Stranger Music: Selected Poems and Songs, and in 2006, after 10 years of delays, additions and rewritings, Book of Longing. The Book of Longing is dedicated to the poet Irving Layton. Also, during the late 1990s and 2000s, many of Cohen's new poems and lyrics were first published on the fan website The Leonard Cohen Files, including the original version of the poem "A Thousand Kisses Deep" (which Cohen later adapted for a song).

Cohen's writing process, as he told an interviewer in 1998, is "like a bear stumbling into a beehive or a honey cache: I'm stumbling right into it and getting stuck, and it's delicious and it's horrible and I'm in it and it's not very graceful and it's very awkward and it's very painful and yet there's something inevitable about it."

In 2011, Cohen was awarded the Prince of Asturias Award for literature.