Wrecking Ball is the 17th studio album by the legendary American rocker Bruce Springsteen. Like many of the Boss' best albums, Wrecking Ball was inspired by the U.S. falling on hard times economically, and in particular, it was inspired by the Occupy Wall Street movement. The album's first single, "We Take Care of Our Own", was released on January 19, 2012. All but three of the songs (Wrecking Ball, American Land, & Land of Hope and Dreams) were written in 2011.

Below are the tracks on Wrecking Ball. Clicking the name of the song will take you to that song's lyrics on the Lyric Wiki. You can check out which track people are rating here Best Wrecking Ball Track On Earth. 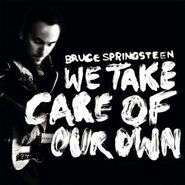 Clarence Clemons and Bruce back in the day. Wrecking Ball was Clemons' last recording before he died in 2011
Add a photo to this gallery

Retrieved from "https://music.fandom.com/wiki/Wrecking_Ball_(Bruce_Springsteen_album)?oldid=111966"
Community content is available under CC-BY-SA unless otherwise noted.